First of all, who is your character?  In order to get to know this burgeoning idea which is your character, his personality, quirkiness, cadence and attitude you need to interrogate, or to put it nicely, interview him. You need to write backstory. What made your character who they are?  Why do they do the things they do? If I asked 10 individuals to describe the color red, I’d get 10 different descriptions.  That’s the exciting part of creating characters and getting to know them.  It’s all about what makes them different.

Think about your character’s emotional reaction to fear, sadness, joy, anger, peace, awkward moments.  How do they display those reactions physically, and or verbally?  Do they react like a lightening bolt, a tsunami or a black hole?

In honor of ReFoReMo, which just ended, here’s a Mentor Text Writing Prompt:

Take two of your favorite main characters from similar genres, and place them in a situation, i.e., lost in a blizzard, at the top of the Eiffel tower, on a desert island inhabited by cannibals and surrounded by sharks, in the middle of a fancy black tie event wearing flip flops, tutus, and deelyboppers.   How would they react?  What would they say? How would they feel?  How would they solve their problems?  Do the same thing with the secondary character, if there is one.  Notice how differently each character reacted, in what he said, his body language, in what he chose to do, and how he solved his problems.

Writing Exercise: Take two of your own main characters from similar genres, and two secondary characters. Place them in situations like the ones mentioned above. Have fun noticing the differences within their reactions. Maybe you’ll find you’ll want to kick your main character’s reaction up, or down, a notch.  Maybe you’ll play with making your secondary character more contrasting.  It’s all about character and being true to it.

In my latest book Cleo’s Big Ideas: One Thing Leads to Another, published by Eifrig Publishing,
Cleopatra W. Darby, the main character, is full of grand ideas.  Like the letters in her name, she has a slew of them, and besides for ideas Cleo is also full of character. From the way she dresses to how she puts her words together, to even how she delivers her words, and to how she sees the world. Inventive is the word that best suits her, so, when I think of what her reaction might be to an event, I always think out of the box, inventive.  Compare that to Cleo’s best friend, Albert Einsbine, and you’d read about a much more interstellar perception and a likely extraterrestrial reaction.

Getting to know your character inside out is a lot of fun, and when you know them so well that you think about their reactions before your own, then they’re ready to tell their story. 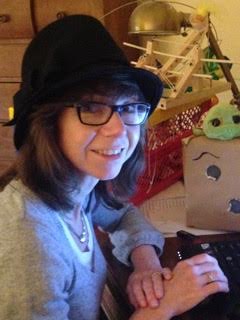 Janice Milusich is the author of a picture book entitled, Off Go Their Engines, Off Go Their Lights, by Dutton, a middle grade ebook entitled, Bryn’s Quest: The Search for Clun’s Treasure, by MuseItUpPublishing, and a recently released chapter book entitled, Cleo’s Big Ideas: One Thing Leads to Another, by Eifrig Publishing.  Janice is currently a participant of Stonybrook University’s Children’s Literature Fellowship as well as a teacher for the blind and visually impaired.

You can find Janice at janmilusich.com or jan.milusich/facebook
Posted by Unknown at 3:00 AM