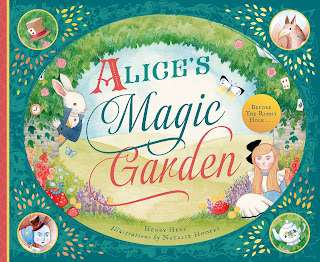 FROM THE PUBLISHER: Curiouser and curiouser! In this imaginative prequel to Alice's Adventures in Wonderland, Alice finds herself at a gray, dreary boarding school that is decidedly up the rabbit hole. From the relentless clocks to the beastly students, Alice's world is void of color and cheer -- until Alice finds a secret garden and begins tending its wilting inhabitants. When Alice's love touches an ordinary caterpillar, a lorry bird, and a white rabbit, magical things will happen-- and that, as you know, is just the beginning of the story. Filled with literary allusions and clever nods to its classic roots, Alice's Magic Garden is a delightful prequel that begs and escape to the whimsy of wonderland.

SNIPPET:
"I'll have that vase!" demanded the biggest of the group.

"Nonsense! They aren't yours, and you shan't have them," replied Alice (perhaps more bravely than she felt). The bullies closed in around Alice.

One reached for the vase.

Alice stood her ground...but she did not stand alone.

MY THOUGHTS: This clever mash-up of both the secret garden and Alice's Adventures in Wonderland really engaged me. I appreciated the way the artist introduced Alice's world with gray tones and then brought in bright light and colors. I thoroughly enjoyed all the details and references the author made to the original text! What a fun and imaginative romp through a magic garden with curious Alice. Even better, woven into the book is a tale of three bullies who should have thought better than to bring their darkness into a magic garden!

REVIEWER:
Lynne Marie is the author of Hedgehog Goes to Kindergarten - illustrated by Anne Kennedy (Scholastic, 2011), Hedgehog's 100th Day of School – illustrated by Lorna Hussey (Scholastic, January 2017), The Star of the Christmas Play -- illustrated by Lorna Hussey (Beaming Books, 10/16/2018), Moldilocks and the 3 Scares -- illustrated by David Rodriguez Lorenzo (Sterling, 2019)  and her first non-fiction picture book, Let’s Eat Around the World -- illustrated by Parwinder Singh (Beaming Books, 2019) and more forthcoming. She is also a freelance Editor and a Travel Agent. When she’s not traveling to Disney World, Universal Studios and fascinating places around the world, she lives on a lake in South Florida with her daughter, son, a Schipperke named Anakin and several resident water birds. You can learn more about her at www.LiterallyLynneMarie.com.

PLEASE feel free to leave a comment (I answer them all) and to sign up for e-mail notifications of new posts.
Posted by Lynne Marie at 5:06 PM