THE STORY BEHIND THE STORY: Shannon Stocker's Can U Save the Day illustrated by Tom Disbury 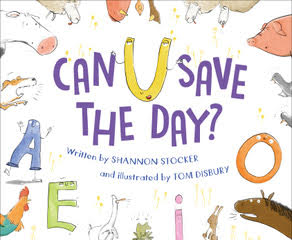 THE STORY BEHIND THE STORY
by Shannon Stocker

One chilly night, late 2015, I tucked under the covers after an exhausting day. Christmas loomed and I felt utterly unprepared, despite the fact that I’d recently quit my job to focus on being a mother and a writer. Evenings overflowed with decorating, cleaning, cooking, and wrapping, while I stole daylight hours to write. But for weeks, I’d been reworking a picture book that simply didn’t want to cooperate. I felt defeated.
I kissed my husband goodnight and turned off the light. As I finally drifted toward sleep, words filled my head.
Instead of bark, the dog said BRK.
I rolled over and tugged the covers higher.
Instead of bark, the dog said BRK, the words screamed.
I’ll remember in the morning, I thought-screamed back.
NO YOU WON’T, my subconscious shouted. INSTEAD OF BARK, THE DOG SAID BRK!
I sighed. Fine, I thought. I snagged my phone and typed the words into my NOTES section, then rolled over and closed my eyes again.
And the duck…couldn’t quack…she could only… 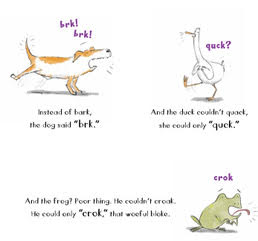 Quck, I thought. Wait a minute… Bark. Brk. Quack. Quck. Croak. Crok. Moo…
I grinned.
My eyes snapped open and I reached for my phone again. As I typed the lines, my brain became overwhelmed by an onslaught of vowel-less farm animals. I kicked the covers off, the mattress creaking as I stood.
“Where are you going?” my husband mumbled.
“Sorry—go to sleep. I’m gonna be a while,” I said. “I think I’ve got a good idea for a book.” 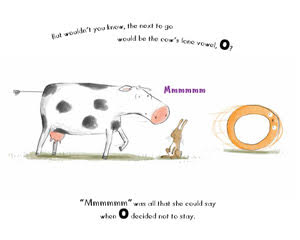 The first half of the story rolled out of me, in rhyme, within an hour. Once my thinking slowed, I allowed myself to get some rest. The next day, I finished the first draft of what was then called, THE DAY ‘A’ RAN AWAY. In that version, B bullied A, who became sad and ran away. E, I, and O followed suit, leaving behind a mess of stuttering, stammering farm animals. 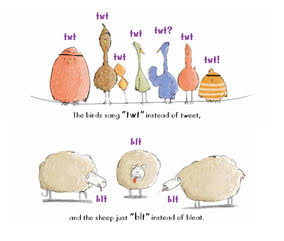 Realizing that the vowels are crucial, U convinced her gang to return and B saw that even though there are only five vowels, they are all equally important.
The book rolled out perfectly the first time, sold quickly, and landed me my dream agent. Right?
Ha.
I queried a few of my top agent choices with the story, including Rosemary Stimola. Many were kind enough to respond that they loved the idea, but something was missing. It was always a “no.”
I reworked the story with two critique partners I’d met at my first SCBWI conference the prior fall. I joined a local critique group and reworked it with them. I took an online class and reworked it again. In the fall of 2016, I attended my second SCBWI conference, submitted the story for a paid critique, and reworked it again. Late fall 2016, I paid for an online critique by an editor who loved the idea, but suggested I rewrite the story without rhyme. My heart sank. The story first came to me in rhyme. As a songwriter, I believed in my ability to write with strong meter, rhythm, and rhyme. But I’d been around long enough at this point to know that if an editor wanted you to try something, you should try it. So I did.
I hated it.
And that’s when I got my first bite from a publishing house I’d queried through the slush pile. In late 2016, an editor suggested that not only should vowels disappear from the animal sounds, perhaps they should disappear from everywhere. What if the vowels left the farm, and road signs lost the vowels, too? It was a suggestion I could embrace wholeheartedly.
As the rewrite unfolded, I injected a scene where a truck nearly flattens the consonants. It became clear that U was the heroine of my story, so a new title emerged: CAN U SAVE THE DAY. This editor and I went back and forth for a few revisions, then BOOM! My story went to editorial.
Just as quickly as my dream ignited, it died. The editorial director felt the idea was too abstract for young readers. But the momentum had given me hope.
Early 2017, I signed up for another online editorial critique. This one was with Sarah Rockett of Sleeping Bear Press. In some ways, her suggestions mirrored those of the first editor. She wanted me to clean up my logistics—it would be much funnier, she thought, if the vowels left all the dialogue as they abandoned the farm. But in other ways, she disagreed with the other editor. Sarah suggested I bring the vowels back to the farm for the whole book. And instead of a truck, how about a tractor? And tension, she said. Add more tension.
So I did. Sarah and I emailed revisions back and forth until finally, she sent my fifty-sixth draft to her editorial team.
They loved it.
About two months later, in May 2017, I learned that CAN U SAVE THE DAY had passed through Acquisitions as well, and Sarah offered me a contract. Champagne flowed!
Almost one full year after the contract was signed, I learned that my illustrator would be Tom Disbury. I looked him up and felt thrilled by his humorous, modern style. I knew his artwork would pair perfectly with the manuscript…and it does!
Now, over two years following the sale of my first picture book, I can look back and appreciate the lessons I learned during this period of time. Patience. Persistence. Gratitude. Every step served a purpose. I’m grateful to my early critique partners who guided me on this book, and I’m grateful to my new critique partners and agent, Allison Remcheck, who forge ahead with me on this crazy road. It is because of all of them that I’m now celebrating my next book, LISTEN (Evelyn Glennie: How One Deaf Girl Changed the World of Percussion), to be released by Dial Books for Young Readers!
Stick to it, y’all. It can happen!

GIVE-AWAY: Shannon is willing to give-away a critique and a book, so we will have not one, but TWO (2) lucky winners. To be eligible, be a follower of this blog, and leave a comment for Shannon on the blog. For extra entries, please share this post and let us know where you posted it. Thanks in advance for helping promote this fabulous author and book.

Winners Chosen 9/1/2019 and announced shortly thereafter! PLEASE NOTE: If you are chosen, and you are not a follower of this blog, another winner will be chosen, so please be certain to follow the instructions. Thank you. 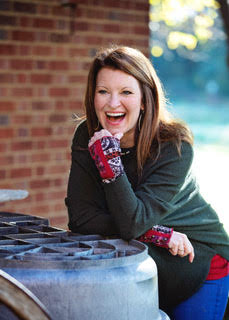 Shannon Stocker is an award-winning author and proud word nerd who loves all letters equally. She lives with her husband, Greg, and her children, Cassidy and Tye, in Louisville, KY, where she molds the alphabet into picture books and songs all day. LISTEN, Shannon's picture book biography about deaf percussionist, Evelyn Glennie will be released by Dial Books for Young Readers (Penguin/Random House), and several of her stories have been published in Chicken Soup for the Soul. Shannon currently serves as SCBWI social co-director for Louisville, a judge for Rate Your Story, and she created the blog series, Pivotal Moments: inHERview, highlighting transitional life stories of female picture book authors. Cool facts: Currently writing her memoir, Shannon is a medical school graduate, a coma survivor, and an RSD/CRPS patient and advocate. She’s also a singer/songwriter who once performed two songs, including one original, as part of an opening act for Blake Shelton.
To subscribe to her blog, visit her website, http://www.shannonstocker.com/blog/. She can also be found tweeting positive quotes, mantras, and adorable animal pics @iwriteforkidz. Shannon is represented by Allison Remcheck of Stimola Literary Studio.
WEBSITE LINK:
www.shannonstocker.com
SOCIAL MEDIA LINKS:
Facebook (Shannon Otto Stocker) - https://www.facebook.com/shannon.o.stocker
Facebook author page (Shannon Stocker Author) - https://www.facebook.com/shannonstockerauthor/
Twitter - @iwriteforkidz
Instagram - @iwriteforkidz

PRE-ORDER LINK:
CAN YOU SAVE THE DAY