THE STORY BEHIND THE STORY: 10 Turkeys in the Road by Brenda Reeves Sturgis 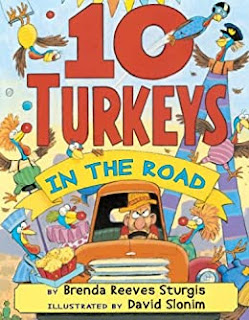 TITLE: 10 Turkeys in the Road

I began my writing journey in 2004 when my daughter was in Kindergarten. I had attended an author visit at Baldwin Consolidated School and met author Lynn Plourde. It was at that moment that I knew I wanted to be a writer. Nobody told me how difficult it actually is, so I just threw myself into the process, writing, learning how to query, joining critique groups, and submitting. At that time, everything was submitted through postal mail, and I researched publishers in the Children's Writers and Illustrators Market Guide book.
Kelly DiPucchio, New York Times best selling author and talented author of many books was featured. I reached out to her, as she offered a critique service at that time. I sent her six stories to be critiqued. I was incredibly nervous waiting for her thoughts but she sent great feedback and told me that I had a natural ability to hear and write rhyme. Up until that point, I had zero belief in myself but KNEW deep in my heart that I wanted to be a children's published author. Throughout the years, her kind words have stuck with me and spurred me on in times of great adversity and rejections.
We lived down a long dirt road, at Silver Lake in Shapleigh, Maine. One day, as I was taking my daughter to school, there was a rafter or turkeys blocking the road. We were late, I needed to get her to school, and I sat in the car impatiently waiting for them to move. I wanted in the worst way to honk my car horn at them to move them along, but instead...I sat and watched them and their funny antics. They would strut, then fly up into the trees, and at that moment a seed was embedded.
I woke up at 3:00 a.m. (which is my normal writing time) with the story in my head. It unfolded fairly quickly, and presented itself to me with the refrain, "One Turkey flew away." I wrote it, and submitted it to my critique group, and got some encouraging feedback. I submitted the story to my friend Shari Dash Greenspan, the editor of Flashlight Press. She liked it but it wasn't right for her publishing house but she offered some good and valid advice about the scenes. At first, it was just about 10 Turkeys doing funny things in the road, and blocking a driver. Around this time, I submitted 10 Turkeys in the Road to Roxyanne Young's Smart Writer's contest, along with another story entitled Touchdown! (This story was about a little girl football player). Touchdown won first place in the contest, and 10 Turkeys in the Road took an honorable mention as well.
This contest win helped me to sign with my first agent, the amazing Josh Adams of Adams
Literary. He began submitting this story, along with Touchdown, which eventually won the MeeGenius Author Challenge and was released in e-book form. 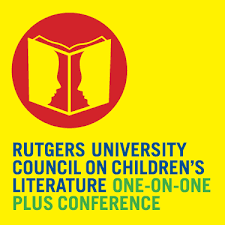 I attended RUCCL (Rutgers University Council of Children's Literature.) This is a conference where authors are matched one on one with editors, and also have a five on five as well. I was matched with Margery Cuyler of Marshall Cavendish, now Two Lions Publishing, and owned by Amazon.
Margery liked 10 Turkeys in the Road but asked me to rewrite it about something else. She liked the concept, she liked that it was a countdown book, from 10-1 but wanted it written about Turkeys in a circus. I was up for the challenge and went home and rewrote the manuscript, and it was submitted to her.
She acquired the story in 2008, and it was released in 2011. This story is illustrated by famed artist, David Slonim, and the illustrations are painted in acrylic oils. Shortly after its release, it was acquired by Scholastic Book Clubs and released in softcover and in audio, it did very well and earned out the advance in its first three months. It has continued to do well over the years, and it is so fun to read to children, as they flap and gobble and fly away one at a time, always with a lot of laughter. In September it was released in softcover.
I have found that everything in life is cumulative with one thing leading to another. It was at one of my first conferences that I met Lynne Marie, and we became fast and furious friends, who now collaborate together with several stories that we are submitting to editors. My advice to new writers is this...NEVER give up. Don't let anyone tell you it can't be done. Find a way to write something different. Overturn stones, meet friends, write, rewrite, revise, rinse, and repeat. 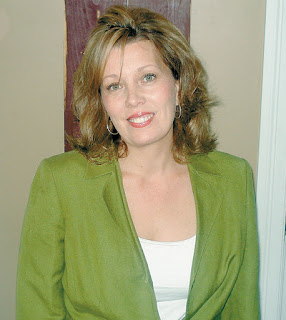 Brenda Sturgis is the author of 10 Turkeys in the Road - illustrated by David Slonim (Marshall Cavendish/Amazon/Scholastic 2011), The Lake Where Loon Lives – illustrated by Brooke Carleton (Islandport Press 2014) and Touchdown - illustrated by Trey Chavez (MeeGenius 2014). Her latest picture book, Still A Family, came out in 2017 published by Albert Whitman and illustrated by Jo Shin Lee and was named a top 100 book from the New York Public Library and a top 20 book from Mighty Girl. It was recently chosen as a selection for the DOE'S (Department of Education) NYC booklist and will be featured on the PBS NYC Thirteen show, Let's Learn. You can visit her at http://www.brendareevessturgis.com/home.html,and friend her on Facebook at Brenda Sturgis.
Posted by Lynne Marie at 3:00 AM