GUEST POST: Backstage at The Family (and Frog) Haggadah with Karen Rostoker Gruber and Ron Isaacs 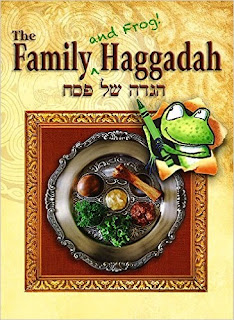 The Family and Frog! Haggadah


by Karen Rostoker-Gruber, as Frog! and Ron Isaacs.

Make your seder different than all other seders!
Start with a traditional Haggadah text, add artwork, your favorite songs and fun facts, then add a hopping frog to its pages and you’ll get. . .

The Family and Frog! Haggadah

Since the release of this Haggadah, things have been a bit crazy.  We’ve been doing Passover shows with Frog (I’m also a ventriloquist), Barnes & Noble bought 900 copies for their stores nation-wide, there were promotional videos taken of Frog (I’ll put a link to them at the bottom of this article), our book was in the March edition of Hadassah Magazine, we were on the front page of The New Jersey Jewish News (March 23), and on one of those days, our book hit #1 on Amazon! 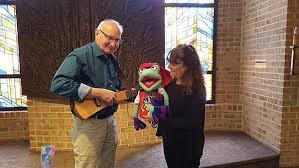 Background info on how it came about
The Family and Frog! Haggadah came about in a board room at Behrman House, a Jewish publishing company, based in Springfield, NJ.  Our book, “Farmer Kobi’s Hanukkah Match,” was just named a National Jewish Book Award Finalist, and the editorial staff at Behrman House wanted to know if Ron and I would like to work on a Haggadah together.  The stipulation was that the Haggadah was to be like no other:  It had to be traditional in content, but fun! for the whole family—ages 3-90.  That was a tall order.

Ron wrote the Haggadah, because he is a Rabbi, and I decided to add a character that would liven up the seder.  Dena, the Editorial Director, suggested a frog, which was brilliant!

That night I went home, read Ron’s whole Haggadah, and started letting my character, Frog, comment on everything—similar to things that someone might say at an actual Passover seder—under their breath or otherwise.

Every time I thought that I was done, and spoke with Ann Koffsky, the editor on the project, or Dena Neusner, the Editorial Director, they pushed my creativity more and more.  I was allowed to do anything that I wanted to do with Frog, so I did.  I have Frog interacting with the Haggadah in ways that were never done before.

Frog is 5 years old and gender neutral.  Frog spills things, makes a matzah mess, plays guitar, runs away from Pharaoh’s army, and even eats a locust during the seder.  The sky was the limit.

I gave Ann and Dena three times the amount of material for Frog, so that they could take things away and still be left with a whole lot of fun!

This Haggadah was one of the hardest, most challenging manuscripts I have ever worked on.  It changed daily as Ron was still editing while I was getting Frog to comment on things that he was working on at the time.  Plus. . . there was the deadline.  J

The printed Haggadah was more than I ever expected it to be.  It’s beautiful!  Ann designed it to look like a very traditional Haggadah, from the typefaces and colors that she chose, to the background that resembles a piece of papyrus.  She also selected gorgeous pieces of art and artifacts for each page--and then. . .popping out of corners, across the pages, and jumping to different sections, is a cartoon amphibian—Frog.  It’s unexpected and fun!  Not only is there a cartoon frog bursting through the binding, singing songs and breaking matzah, but there are also “Fun Facts,” “Did You Know” and “Try This,” parts of the Haggadah, which elevates this Haggadah even higher and encompasses so many different age groups that there is literally something for everyone.

I am so proud of this project.  And the finished product came out beyond my wildest expectations.  Plus, Frog LOVES it!  And that was important to me.
--Karen Rostoker-Gruber 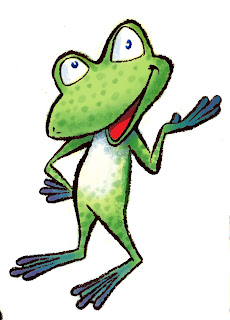 Here’s a link to the videos of Frog:
http://www.karenrostoker-gruber.com/childrens-books/the-family-and-frog-haggadah/
Author bios
Frog
My first book came out February 15, 2017, and I’m only 5 years old!
I write everything in green.  That’s me in the picture above. I’m with Karen.  She adopted me.  I came all the way from Texas to be with her. J

Karen Rostoker-Gruber is an award-winning children’s book author. Her first children’s book, “Food Fright,” was published in 2003 by Price Stern Sloan. Her second children’s book, “Rooster Can’t Cock-a-Doodle-Doo,” was published in 2004 by Dial Books for Young Readers.  It was nominated for the Missouri Show Me Award in 2005.  “Bandit,” “Bandit’s Surprise,” and “Ferret Fun” came out from Marshall Cavendish and all received starred reviews in School Library Journal!  “Tea Time,” her first board book, came out from Marshall Cavendish in 2010.   “Bandit” was nominated for the South Carolina Book Award and both “Bandit” and “Bandit’s Surprise” were featured on Celebrity Apprentice, and “Ferret Fun” was preliminarily nominated for the Missouri Show Me Award.  Both “Rooster Can’t Cock-a-Doodle-Doo” (in 2005) and “Bandit” (in 2009) were listed as International Reading Association—Children’s Book Council Children’s Choice Award recipients.  In the spring of 2017, “Maddie the Mitzvah Clown,” will be published by Apples and Honey Press, a division of Behrman House.

Rabbi Ron Isaacs has served Temple Sholom in Bridgewater, New Jersey, as its spiritual leader since 1975. He has a doctorate in educational technology from Columbia University’s Teachers College. An adjunct lecturer at the Jewish Theological Seminary of America, he is the author of more than 100 books, including “Ascending Jacob’s Ladder: Jewish Views of Angels, Demons, and Evil Spirits;” “Ask the Rabbi: The Who, What, When, Where, Why, and How of Being Jewish;” and “Kosher Living: It’s More than Just the Food.” He is the first rabbi in New Jersey to receive the United Synagogue’s Keter Torah award for outstanding lifetime achievement and rabbinical excellence. He is known as the “teaching rabbi.”

NOTE: Please check out yesterday's post for a chance to win this wonderful book and have frog's presence at your Passover Seder!
http://literallylynnemarie.blogspot.com/2017/04/ppbf-family-and-frog-haggadah-by-rabbi.html
Posted by Unknown at 8:31 AM