THE STORY BEHIND THE STORY: There Was an Old Gator who Swallowed a Moth by B.J. Lee 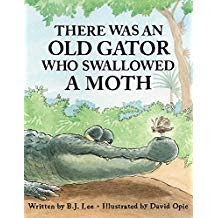 Here's the Story -
I’m delighted to share a sub-story behind the story. That sub-story is: cumulative rhyme.  I first encountered the possibility of using cumulative rhyme as a structure for writing a picture book in my critique group, where over the years, several works in progress have been posted using the This is the House that Jack Built and There Was an Old Lady Who Swallowed a Fly structures.  Being a poet at heart, these structures appeal to me greatly because they are, in essence, poetry and because, while I do write in prose, I have a soft spot for rhyme. I began studying cumulative rhyme and had two works in progress using this format when I encountered the idea for the Gator. My husband and I saw a juvenile gator riding waves in a local lake and it dawned on me how larger-than-life gators are. That's when my Gator character was born! I also thought that it might make a great regional flavored book and, since I was trying to break into picture books, I thought this might be the way to go. The other two works in progress went on the back burner and I focused on bringing Gator to life. I targeted Pelican Publishing because they were regional and because they had already published several There Was an Old...books. My hunch was right and Pelican Publishing responded quickly to my query. 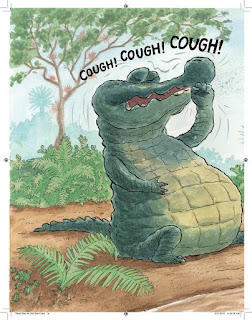 But let me back up a bit. In order to write one of these There Was an Old Lady... parodies, I did a lot of studying. I looked at Lucille Colandro, Jennifer Ward, and Penny Parker Klostermann (a CP of mine). In all three of these authors’ works, I noticed that the MC does not die in the end and I really like the MC not dying. I also like the way that these authors changed up the original.

putting an end to the steed’s mad antics and leading into the denouement as well.  Brilliant! 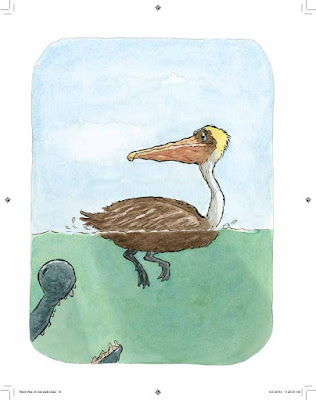 Though I experimented with various of these techniques when writing There Was an Old Gator Who Swallowed a Moth, I finally decided to go with a fairly straight-up version of the original There Was an Old Lady.... I feel that it worked best for my Gator character, and clearly Pelican Publishing agreed!


That's my substory behind the story and I'm sticking to it! :)


Description of There Was an Old Gator Who Swallowed a Moth

Gators and panthers and crabs, oh my! The classic cumulative tale There Was an Old Lady gets a Floridian flourish in this charming adaptation.  Down in the southern swamps a hungry gator accidentally swallows a moth.  Of course, he swallows a crab to get the moth! What will he swallow next? The gator predictably continues swallowing bigger and bigger creatures until the unexpected happens―all over the page! Along the way to its hilarious ending, the story― strengthened by the delightful illustrations―introduces readers of all ages to the many critters, both big and small, of the Florida swamp. With a familiar use of repetition and an abundance of rhythm, this silly story is perfect for read-aloud experiences.

B.J. Lee is a former college music librarian turned full-time author and poet. Her debut picture book, There Was an Old Gator Who Swallowed a Moth, released on February 1, 2019 from Pelican Publishing. Additionally, she is an award-winning children’s poet with over 100 poems and stories published/forthcoming in major anthologies by such publishers as Little, Brown, National Geographic, Bloomsbury and Wordsong. Magazine credits include Spider, Highlights, and The School Magazine. She lives in Florida with her husband, poet Malcolm Deeley, and toy poodle Bijoux.

B.J. Lee is available for school visits including assemblies and writing and poetry workshops with a musical component. She can be reached at bjlee@childrensauthorbjlee.com.

PLEASE don't forget to SUBSCRIBE to this blog for notifications! More good stuff to come as well as amazing subscriber opportunities :)

FEEL FREE TO CHECK OUT OUT OUR OTHER GUESTS Here:
https://literallylynnemarie.blogspot.com/2019/02/master-list-2019-story-behind-story.html