THE STORY BEHIND THE STORY: A Doll for Grandma - A Story about Alzheimer's Disease by Paulette Bochnig Sharkey 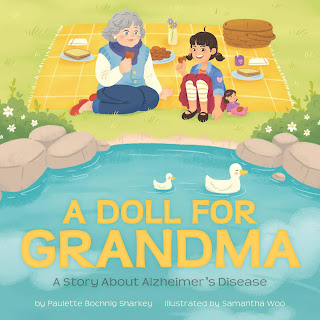 The Story Behind the Story of A Doll for Grandma:
A Story about Alzheimer’s Disease
by Paulette Bochnig Sharkey
The seed for my debut picture book, A DOLL FOR GRANDMA, was planted at a

a pizza party, when a musician friend mentioned visiting his grandmother in her memory-
care home. She’d told him, “I had fried mosquitoes and a cup of hot tea for lunch.”
That would be a good line in a picture book, I thought.
I've been writing for children since the 1980s -- games and puzzles and short non-
fiction articles for magazines like Highlights, Cricket, Ladybug, and Hopscotch. But my
long-term goal was always to write a picture book, a genre I’ve loved since my daughter
was little and we read tall stacks of them every bedtime.
I'm also a pianist. After retiring from my job as a reference librarian about 15 years
ago, I started working as a volunteer pianist in assisted-living centers and memory-care
homes in my community. My volunteering led to a blog. Writing muscles limbered up,
I revisited by goal of writing a picture book. Now I had a topic: Alzheimer’s disease.
And I had that great “fried mosquitoes” line! In 2017, I joined SCBWI and signed up for
a Writer’s Digest University picture book course. I finished the class with a solid draft of
A DOLL FOR GRANDMA.
The story went through several rounds with my critique group. I revised, paid for professional critiques, revised again.
Then I queried that manuscript hard. Mostly I got no response or a form rejection. Occasionally someone labeled the story “too quiet.” (Editor Frances Gilbert says “too quiet” can sometimes be code for “I don’t like your book” but can also mean it’s a gentle story. My story is gentle. I intended it that way.) There were a few encouraging comments, too, including this one: “There is a deep sense of love that pervades these pages.”
Along with querying, I entered A DOLL FOR GRANDMA into all the writing contests I could find, including one held by Beaming Books. Although I didn’t win, editor Naomi Krueger offered to take by entry through their general acquisitions process. They soon passed. Several months later, I heard from Naomi again: There was renewed interest in my manuscript. Could she take it through acquisitions a second time? Yes, please! A month later, while I was in Alaska awaiting the birth of my first grandchild, I received an offer letter. 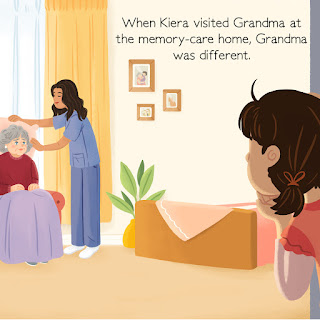 A DOLL FOR GRANDMA: A STORY ABOUT ALZHEIMER’S DISEASE (illustrated by Samantha Woo, Beaming Books, 2020) is about a little girl named  Kiera who is very close to her grandmother. When Grandma develops Alzheimer’s, the old ways they played together no longer work and Kiera needs to figure out new ways to connect.
She gives Grandma a doll and together Kiera and Grandma care for their “babies. 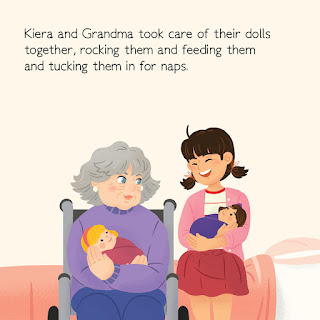 "Kiera models the best way to interact with people living with dementia: by accepting their version of reality, rather than trying to bring them back into ours.
It’s a story about kindness and empathy, about the special bond between grandparents and grandchildren, and about loving and accepting people as they are, even when they change.
To create the character of Grandma, I drew on my experiences in memory-care homes. For example, Grandma can still sing familiar songs because musical memories are held in a part of the brain often left undamaged by Alzheimer’s disease. I’ve seen this a lot. Even people who can no longer speak can sometimes still sing when I play a song from their younger years.
I also used experiences I had caring for my mother, who had dementia. In the hospice facility where she spent her last week, she had a lovely moment with a therapy dog. I put that into the book. And that “fried mosquitoes” line as well!
After writing A DOLL FOR GRANDMA, I discovered Pearl’s Memory Babies, a beautiful example of embracing the altered sense of reality that Alzheimer’s disease causes. This nonprofit organization delivers baby dolls to people living in memory-care settings. The dolls soothe and comfort the residents, give them something to care for, and help them feel needed again. Alzheimer’s disease takes away memories, but it doesn’t take away the ability to love.
According to the Alzheimer’s Association, someone in the U.S. develops the disease every 65 seconds. I am fortunate to be able to donate all my author proceeds from A DOLL FOR GRANDMA to support Alzheimer’s research. We must find a cure. Your purchase helps!

GIVEAWAY: Paulette has kindly offered to give away a copy of the book! Please comment below for your chance to win:
1. 2 Extra Chances for Tweeting and tagging @Literally_Lynne @PBSharkey and @BeamingBooksMN (please share link in comment)
2. An extra chance for Sharing this Post on Facebook or other
Social Media (please share link in the comment)
3. An extra chance for ordering the book into your library online
(please mention this on comments).
4. An extra chance for gifting a copy of the book (forward receipt to LiterallyLynneMarie@gmail.com).
5. A chance for leaving a comment!
GOOD LUCK! A winner will be chosen on May 30, 2020. 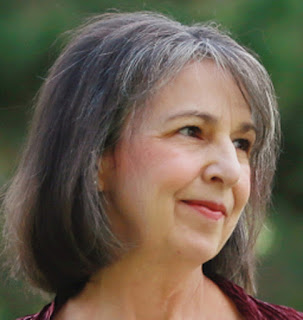 Author Bio: Paulette Bochnig Sharkey worked for many years as a librarian, first in
her home state of Michigan, and later in Australia, Nevada, and Wisconsin. She has
also been a proofreader, ghostwriter, developmental editor, recipe indexer, and transcriber
of children’s books from print into braille. Her writing has appeared in magazines
including Parents, Hopscotch, Highlights, and Cricket.

A DOLL FOR GRANDMA: A STORY ABOUT ALZHEIMER’S DISEASE is her first
picture book.