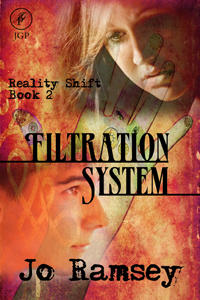 Halloween week is upon us, and in celebration, I am pleased to bring you this eerily perfect prompt by Young Adult Novelist Jo Ramsey.  Book Two of her YA urban fantasy series Reality Shift, entitled Filtration System, is just released. Check it out!
﻿
Voices in Your (Character’s) Head
By Jo Ramsey
In my Reality Shift series of YA urban fantasy novels, the main characters, Jonah and Shanna, each have “guides,” disembodied beings who help them reason things through and offer advice. Since the guides are disembodied, they don’t speak with voices; instead, they speak directly into the minds of Jonah and Shanna. This led to some interesting attempts at formatting, since I needed to keep those conversations separate from Jonah’s and Shanna’s inner thoughts but also didn’t want to present them exactly like spoken dialogue. I ended up using italics, which seems fairly standard among some publishers to represent inner thoughts as well as telepathic communication.
According to Jonah in the books, every human has guides to help them through their lives, though not all humans are aware of or communicate with their guides. That means, if you believe Jonah, that you have them too. And so do your characters.
Write a dialogue between either yourself and one of your guides (perhaps your writing guide, a/k/a muse?) or between one of your characters and one of their guides.
Jo’s Bio
Jo Ramsey is a former special education teacher who has been writing since age five, when someone finally showed her how to move a pencil to make those little squiggles called letters. Before that, she told stories to her stuffed animals. Jo has always had a fascination with stories that show a “normal” child or teenager encountering magic, fighting evil, and so forth, and so that’s primarily what she writes.
Her YA urban fantasy series Reality Shift launched from Jupiter Gardens Press, www.jupitergardens.com, in January 2010. The first book, Connection, was made required reading in summer 2010 for all high school students in Jo’s hometown in eastern MA, in part because of a strong anti-bullying theme which runs throughout the series. Book 2 in the series, Filtration System, is just out, with books 3 and 4 slated for March and July 2011, respectively and six additional books planned. Reality Shift is about Shanna Bailey and Jonah Leighton, two high school students who use skills such as energy healing and channeling to banish demons, send malevolent dead spirits to “the Between,” and prevent our universe from being vaporized. Bridge, Book 1 in a new YA urban fantasy series called The Dark Lines, will be released in May 2011, also from . 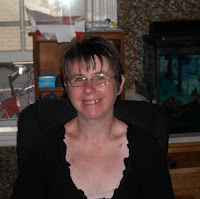 Jo lives in with her two daughters, her husband, and two cats, one of whom occasionally tries to help her write. You can learn more about her and her books on her website, http://www.joramsey.com/.
Posted by Donna Farrell at 1:42 PM