[ANECDOTE] November 1st/Reading is for the Dogs! 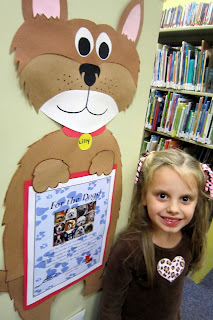 I had great plans for November with the 1st of the month being
National Author's Day and ALSO the kick-off of the 2010 Annual
PIBOIDMO. Picture Book Idea Month is a fabulous concept started by author Tara Lazar (The Monstore, Aladdin/Simon & Schuster 2013),  where you pledge to write down (of course, you can do more) at least one new picture book concept a day for for each day of the month of November.  I am participating, as well as many of my friends and the members of one of my critique groups (The Yellow Brick Road).
I would have liked to get to celebrate these fabulous events by harvesting ideas and writing, but life had other plans. So, instead of writing, I was a one person do-crew clean up for the after Halloween weekend mess. And then, it was off to pick up Kayla from school and take her to the Pediatric Eye Doctor for a thorough check up after failing the school's eye exam. Still, promoting good eyesight is definitely related to reading, so I felt like I was still doing my part toward the month's focus on books.  And the day had just begun. 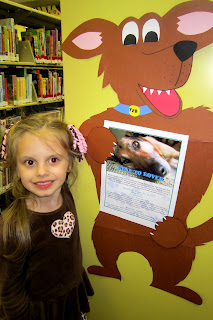 November 1st also kicked of Kayla's school's Parents As Reading Partners (PARP) program. This year's theme...Reading is Out of this World! So, after the Optomotrist, we rocketed straight toward the library and picked out books. We were able to snag lots of fun ones, like SHARK VS. TRAIN by Chris Barton, JEREMY DRAWS A MONSTER by Peter McCarty, ALWAYS LOTS OF HEINIES AT THE ZOO by Ayun Halliday, lots of Mo Willems books to get ready for the SCBWI Winter Nationals in January 2011, and MORE!
But that's not all (and here's where the dogs come finally in)! At 6:40 PM, Kayla was first to head-off a program called "Read to Rover," where children read to certified and trained therapy dogs from Therapy Dogs International. While this is a fun and exciting event for children like Kayla who love reading and dogs, it can prove helpful to reluctant readers, as the dogs are non-judgmental in their listening and can help improve literacy skills. This program was arranged by our fabulous children's librarian Katie at the Nesconset Library (http://www.smithlib.org/).
The children who participate in the program can read from a selection of books picked out by the librarian or bring in their own. Kayla brought a few books from home.  Next week at Part 2 of the Program, Kayla will be reading two stories she has authored and illustrated. 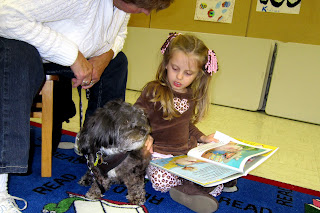 Here, Kayla is pictured with Casey the Therapy Dog, who is a poodle mix.
First she read DESERT ROSE AND HER HIGHFALUTIN' HOG by Alison Jackson and illustrated by Keith Graves to Casey and his owner. This book is a family favorite, and is written by the same Alison Jackson who wrote that the fun book I KNOW AN OLD LADY WHO SWALLOWED A PIE, which was illustrated by Judith Byron Schachner, which is available through the Scholastic Book Club! 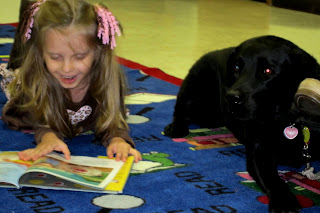 After reading to Casey, Kayla wanted a chance to read to Lucy. We had picked out DEAR MRS. LARUE: LETTERS FROM OBEDIENCE SCHOOL, written and illustrated by Mark Teague  (and published by Scholastic Press) to read next, but Kayla wanted to read DESERT ROSE again (!!!) which Lucy the Guide Dog and her owner enjoyed very much, perhaps even more than Casey did. 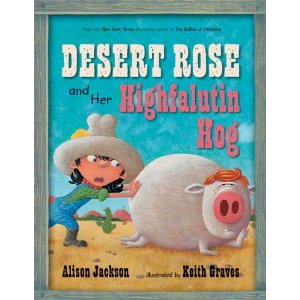 As sad as we were to say goodbye to our new friends, our fun this day did not end with the dogs.
We bundled up and went back into the cold New York air and headed to Barnes and Noble for Kayla's school's PARP kick-off fundraiser. The night promised several activities, including:
Readings from school teachers and the principal, a bookmark craft, a scavenger hunt, and a lighter wallet when all was said and done.

Kayla picked out several picture books, SQUIRREL'S NEW YEAR'S RESOLUTION written by Pat Miller and illustrated by Kathi Ember; FANCY NANCY AND THE FASHION BOUTIQUE written by Jane O'Connor and Illustrated by Robin Preiss Glasser; A PIRATE'S NIGHT BEFORE CHRISTMAS written by Phillip Yates and illustrated by Sebastia Serra; and THERE WAS A COYOTE WHO SWALLOWED A PIE written by my Highlights Chautauqua Pal Jennifer Ward, and illustrated by Steven Grey. I promptly bought all of these which hopefully will help stomp out the myth that people are not buying picture books! She also picked out a stuffed neck-pillow dog and named in Willie after the dog in A CHAIR FOR PETER by Ezra Jack Keats.
So all in all, I would say although pretty much most of the day went to the dogs and I got no writing done, it was a doggone good day, after all!
As to not being authorly on Author Day, at least it's nice to know that such a day exists! (If you have a moment, please comment in the comment section as to who YOUR favorite author is.)
Posted by Donna Farrell at 6:50 AM