WRITING TIP No. 5: S'witching It Up With Author Wendy Wax

I always love a good story. So it's always a treat when I get to hear the story behind the story, too!
Today fellow LICWI (Long Island Children's Writers and Illustrators) Member Wendy Wax has stopped by the Playground to share her real life inspiration that would become  CITY WITCH, COUNTRY SWITCH!
Wendy Wax’s Writing Tip
I do my best to keep the writing process fun for ME. When I feel stuck, I know it’s time to inject the story with something quirky, magic, or unexpected. Something to re-inspire me. 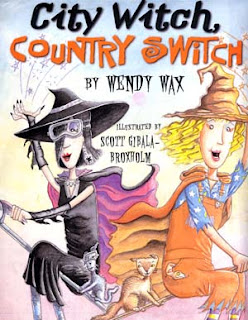 I wrote City Witch, Country Switch after I had moved from NYC to Eastern Long Island. I had enjoyed going back and forth between the two places, but the thought of living in the country full-time horrified me. I made my situation more fun by writing my own version of Aesop’s classic The Town Mouse and the Country Mouse.

I personally couldn’t turn my country backyard into Central Park, but I wanted my characters to be free to whip up whatever their hearts’ desired. So I made them witches. When Mitzi, the city witch, is grossed out by swimming in a muddy pond, she magically turns it into a bubble bath. When Muffletump, the country witch, feels claustrophobic on a city bus, she casts a spell that turns the bus into a hayride.

I made lists of all things related to city and country, and came up with lots of magical spells. If I got bored with one, I’d grab another—or come up with a new one. I did the same with the rhyme stanzas—writing many different versions until I found the one with the most magic. 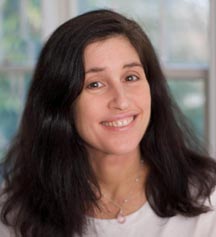 Wendy Wax has written many books for children including City Witch, Country Switch (Marshall Cavendish), Even Firefighters Go to the Potty (Little Simon), Arlo Makes a Friend, Arlo Gets Lost (both Sterling), Clara the Klutz (InnovativeKids), Empire Dreams (Silver Moon Press), Bus to Booville, You Can’t Scare Me (both Grosset & Dunlap), A Very Mice Christmas (HarperFestival), and Renoir and the Boy with the Long Hair (Barron's).

Wendy grew up in Michigan and graduated from The University of Michigan with a BFA in graphic design. She then worked as a children's book editor and a freelance illustrator.

Wendy's, vibrant photo-collages appear in many magazines and books, including three books she wrote and co-illustrated with her photographer husband Jon Holderer.
Feel free to visit www.wendywax.com or http://www.wendywaxblog.com/.
Posted by Donna Farrell at 6:24 PM