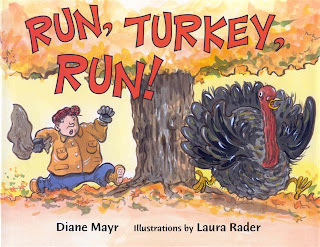 I recently finished reading The Shallows: What the Internet Is Doing to Our Brains by Nicholas Carr.  It confirmed for me what I've seen in my own life, the internet is changing the way I read and comprehend.  The Shallows is an interesting read.  The implications for the future--what we write, and how we write it--are enormous.

One point Carr made, came as a surprise to me, although it shouldn't have:
A series of psychological studies over the past twenty years has revealed that after spending time in a quiet rural setting, close to nature, people exhibit greater attentiveness, stronger memory, and generally improved cognition.  Their brains become calmer and sharper.  The reason, according to attention restoration theory, or ART, is that when people aren't being bombarded by external stimuli, their brains can, in effect, relax.  They no longer have to tax their working memories by processing a stream of bottom-up distractions.  The resulting state of contemplativeness strengthens their ability to control their mind. (p. 219)

I've found myself increasingly involved in writing haiku.  Haiku, traditionally has been about the natural world.  Has my interest in haiku been as a result of an unexpressed need to be out in, and observant of, the natural world?  I've become more attentive to nature.  I go for walks and bring along my camera.  I feel good, both in mind and body.  Then I come home to renewed creativity.  I win all around!

The need for nature in the lives of our children has long been recognized in books such as  Sharing Nature with Children by Joseph Cornell and Last Child in the Woods: Saving Our Children from Nature-Deficit Disorder by Richard Louv.  Louv says, in his introduction,

This book explores the increasing divide between the young and the natural world, and the environmental, social, psychological, and spiritual implications of that change.  It also describes the accumulating research that reveals the necessity of contact with nature for healthy child--and adult--development.

I know I'm the last person on earth to be offering advice about getting away from the computer--between work and home, I spend more hours on the computer than I do sleeping and eating!  But perhaps, by making you more aware of what can happen when you do get a dose of nature, you will be able to act on it and save yourself, and your children.

Here's a haiga that resulted from one of my too infrequent ventures outdoors: 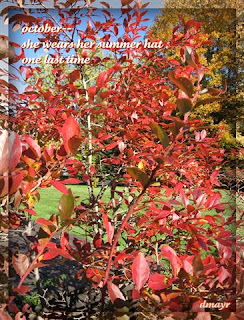 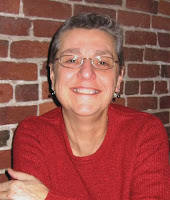 Diane Mayr has been a public librarian for nearly 25 years.  She spent about 10 of those years in children's services, which explains her origins as a writer for children.

Diane has three picture books to her credit, the latest being, Run, Turkey, Run!, which was illustrated by Laura Rader (Walker Books, 2007).  Her first book was nonfiction, The Everything Kids Money Book (Adams Media, 2000).
The "America's Notable Women" series from Apprentice Shop Books quenches her thirst for research, and she gets to profile some amazing women.   Diane also devotes much of her time to blogging through her library blog, Kurious Kitty's Kurio Kabinet, a quote blog, Kurious K's Kwotes, and her personal blog, Random Noodling.  She also shares a blog with long-time writing buddies, The Write Sisters and maintains the Reads-To-Go blog for New Hampshire book discussion groups.

Recently, Diane, a closet poet for many years, has started submitting her short form poems for publication.  She has haiku, tanka, and haiga (illustrated haiku/tanka) in recent issues of frogpond, The Heron's Nest, Notes from the Gean, haijinx, Berry Blue Haiku (for children) and Sketchbook.  She posts a haiga each Sunday, and a haiku each Tuesday, at Random Noodling, too.

Posted by Donna Farrell at 6:33 AM