WRITING PROMPT: Playing Around with Memories by Brandi Dougherty 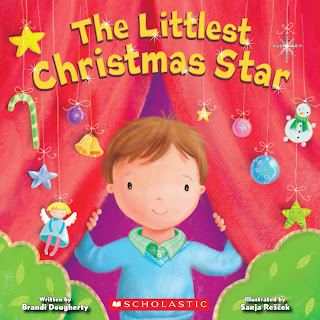 Writing Prompt: School Plays!
The idea for my new picture book, The Littlest Christmas Star, came from remembering my school Christmas play in first grade. I was one of the stars in the night sky hoping to lead Mary and Joseph to Bethlehem. I had one line in the play and I was so shy and scared to say my line. But, rather than writing a story about a shy kid who doesn’t want to be in the play, I decided to write about a very outgoing boy who not only wants to be in the play, but he wants to be the STAR of the show!
So, here is your writing prompt:  think about a school play you were in as a child. Or if you weren’t in a play, think of one your own child, niece, nephew, sibling, or friend was in instead. Think about the theme of that play and the role you or your loved one had. Is there a story behind the story? Maybe everything went wrong on opening day. Or maybe the lead forgot her lines.
Or, is there a new story to tell that spins off from the plot of the play itself? What about the character you portrayed - can you imagine what his or her life was like outside of the play? Or, what happened after the play was over (either in the life of the character, or in a continuation of the play’s story)?
So many fun picture book scenarios can spring from this. Now get busy! J 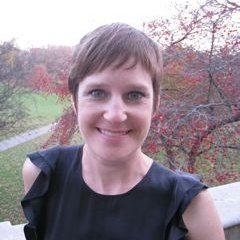 Bio: In addition to The Littlest Christmas Star, Brandi Dougherty is the author of the New York Times Best Seller The Littlest Pilgrim (Cartwheel Books 2008), and three middle grade novels: Miss Fortune (Scholastic, 2010), The Friendship Experiment (Scholastic, 2009), and The Valentine’s Day Disaster (Scholastic, 2008). She lives in San Francisco with her boyfriend and their dog.
Visit her at www.brandidougherty.com