One of the things that surprises people about the process of writing and publishing picture books is that most children’s writers never work directly with their book’s illustrator.  It’s hard to imagine that such a collaborative process as writing a picture book can happen without the two creative parties actually working together! Learning this in my newbie writing days totally upended my idea that I’d be sitting side-by-side my co-creator. I thought I’d create with my illustrator like Oscar Hammerstein did with Richard Rodgers – the two of us shoulder-to-shoulder throwing crumpled paper to the ground until we both lit up and said “By George, I think we’ve got it!”

With four picture books published, and four more on the way, I now have a fairly good understanding of this writer-illustrator dance. And while all my editors have worked slightly differently in the amount of input I have been offered in choosing an illustrator or commenting on the draft illustrations, they have all guarded this tripartite relationship (writer-editor-illustrator) with care.

Yet, while writing a picture book is not as collaborative a process as sitting at the same drafting table with my illustrator, I still consider writing picture books to be a highly collaborative process. In fact, I’d say that writing with the illustrations in mind is central to the way I create – yet I can’t even draw a full moon!  It’s no wonder than that my latest picture book, Painting Pepette, illustrated by Claire Fletcher, celebrates the artist’s creative process – and the artist within us all.

Here are some ways that you can add some picture magic to your picture book writing – no too mention increase your chance of publication!

1. See your story book before you hear your story.  Sometimes a story unfolds in front me like a film already cast with characters and shot on location. In my mind’s eye I see the story frame-by-frame. If I can visualize it this way, then I know it’s a story worth pursuing as a picture book (rather than, for example, a magazine story or a chapter book).

I have been working with a small critique groups for years and often the best praise I can give a book when I’m critiquing is “I can see the book already” – meaning, it feels like a picture book in terms of its visual appeal.  I can see the velvety black spread of the night sky or I can see the cowboy on the bike hurtling down the bumpy dirt road with chickens squawking behind him. This moment of seeing is not only due to what the writer has written on the page, but also due to what the writer hasn’t written. And if I can imagine it, then imagine what an editor can imagine... and what an illustrator can then do!

2.  Use the element of the visual surprise as an integral part of your plot . Some picture books use, to great effect, the fact that each turn of a page is an opportunity to reveal a visual surprise.  This can be a fun surprise or the page turn can be used to slow down the pace of the book and reveal a quiet, more reflective moment in the text. Consider these page turns as scene changes and as opportunity to play with your plot and add visual interest.

3. Consider not only what to put in but also what to leave out.  In my book, Hold That Thought, Milton, illustrated by Ross Collins, I struggled with wordiness in one section of the book. The text felt over-worked and cumbersome.  Then we hit upon the idea of having a wordless spread that would show what I was trying to say.  Ross was able to pack more humor and character into that one spread than I could’ve with an additional 500 words. Since then, I’ve used wordless spreads in other texts.  Not only does it give a moment of reprieve from reading aloud, but it also invites your readers into the book like words alone couldn’t. 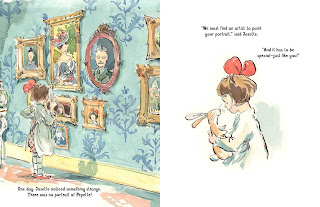 4. Let the illustrator illustrate. As authors, many of us are already visually inclined and we have a
desire to direct our illustrators. But we must aim to be less Fellini and more Woody Allen. Woody notoriously let his actors run with the script– he gave them room to act. In other words, leave space for your illustrator to improvise and enhance your story.  Not only will this show your openness to collaboration (a sign that editors appreciate), but the results can be beautifully surprising.

In my book, A Gift for Mama, set in Vienna, illustrator Alison Jay inserted the story of a dog who follows Oscar through the streets of Vienna. It was a beautiful addition. Likewise, since I had lived many years in Vienna, I resisted the desire to direct the illustrations to be 100 percent accurate and let Alison create something even more magical than what I could’ve envisioned.

5. It’s all in the details.  If your story allows for it, consider how your various props or settings would work visually on a page. Do they create enough visual interest? For example, in my book The Busy Life of Ernestine Buckmeister, illustrated by Suzanne Beaky, the story ends with Ernestine playing with her Dad.  I could’ve had them sitting and playing a board game, but building a tree house together is a much more fun visual! In my upcoming Wakey, Wakey Elephant, illustrated by Michael Roberston, the chicken could’ve marched in playing the harmonica (which is funny enough), but a tuba-playing chicken is just so much more fun visually.

6. Pace the book to ensure movement so that the scenes change and so do perspectives.
Beware of the My Dinner with Andre scenario in your writing. In this 1981 film, the camera is primarily stationary for the duration of the movie and focuses on the conversation of two friends at Café des Artistes.  While the film was an experimental hit, this would make for a very static and boring picture book.  When writing, consider yourself a film director, behind the lens, choosing the shots. You have, on average, 32 frames to work with. Is there enough movement and visual interest to keep your audience engaged?

In my upcoming Little Red Riding Sheep, illustrated by Cale Atkinson, I purposefully played with visual perspective in one scene when I have Arnold, the sheep, scramble up the bean stalk. At this point in the story Arnold could’ve done a number of things but I knew that having the sheep climb up a bean stalk would add a fun visual perspective to the book – and sure enough Cale took this idea and made it even more fantastical.

Our job, as picture book writers, is to find a way to bring our words, together with pictures, to create a story that is  greater than the sum of those parts.  And when it works, it’s pure picture book magic. 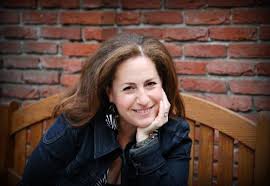 Linda is originally from New York, but has spent the past twenty years in Austria, The Netherlands and now Sweden. Today she lives in the historical city of Uppsala with her wonderful husband and teenage daughter.

Read what people are saying about Josette and her rabbit, Pepette!
https://www.goodreads.com/book/show/27214629-painting-pepette?from_search=true

Other books by Linda Ravin Lodding

A Gift for Mama
illustrations by Alison Jay
Random House