BOOK REVIEW: I Am A Story by Dan Yaccarino 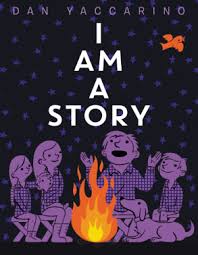 BEGINNING: I am a story. I was told around a campfire...

REVIEW: What I love most about this book is that the art adds not only an illustrative, but a factual level. As a result, like a true picture book, the text and art become something more than their separate parts.

The text and art also work together to make this book appealing to little ones AND older ones. While a seamless, forward moving tale, the art invites the older reader to sit, investigate the details, and ponder.

For example, the art in the first spread (see text above) shows a community of cave men around a fire, with the constellations outlined in the sky.  Without saying it, it infers that early stories where based on constellations and date as far back as the caveman -- aspects that would definitely intrigue and appeal to older children. Continuing the characterization of a story by sharing the methods by which stories were told.  An older child may very well pick up on the settings depicted in the pictures from clues, including Israel, Egypt, Japan and others. Adults may even deduce the exact historic reference, like Giza in Egypt or the prehistoric caves in Lascaux, France.

The brilliant ending depicts a spread very much like the beginning, in which now a modern family, sits around a campfire and tells stories. And the cycle goes full circle.

A great resource for the story and history of the story!

ENDING: I can go with you everywhere and will live forever. I am a story.

REVIEWED BY: Lynne Marie. The opinions contained herein are my own.
Posted by Unknown at 8:15 AM