SQUEAK! What the Mice in GOODNIGHT, MANGER Can Teach us about Picture Book Writing by Laura Sassi

Aren’t picture books amazing?  I mean, in what other format, except maybe graphic novel, do text and illustration work together to tell a story in such a magical fashion.  To be successful, neither text nor illustration is complete without the other and each, in their own ways, must enhance the story.  When I first began writing picture books, I knew this intellectually, but I still needed work in letting my words leave room for an illustrator.  With my first book Goodnight, Ark and my second, Goodnight, Manger, I thought I had mastered that. But, as I learned from the wonderful Jane Chapman, there is always room to grow. Let me explain.

In her delightful style, illustrator Jane Chapman has included an adorable pair of mice in almost every spread of my Christmas picture book, Goodnight, Manger.  The pair actually had their own verse in the almost final version. That verse, however,  got cut from the text in the interest of tightening and streamlining the plot.  In the almost final version, they played an active role in trying to soothe and comfort the crying Baby Jesus.  Here is the outtake: 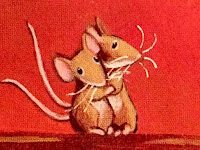 This was actually one of four verses that both Jane and my editor suggested be cut in an effort to streamline the story.  A total of 43 words were cut, bringing the final word count to a slim 256. At first I thought I would miss this mouse-y verse as well as the others, but I don’t. In the process finalizing the these last edits, Jane said something to the effect that if an action is described in the text, it MUST be included within the pages.  But, if it’s not, the illustrator can still make a nod to it in the illustrations.  And that’s exactly what Jane has done with the humorous inclusion of the mice. 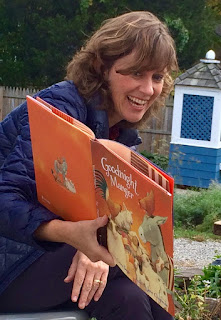 For little readers, it’s engaging to look for the mice on each page spread. And for me as a writer, and perhaps now for you, too, they are serve as a cute visual reminder of the importance of leaving room for the illustrations to tell part of the story.

Happy writing and reading all!

BIO: Laura Sassi has a passion for writing picture books in rhyme and prose. She is the author of two picture books GOODNIGHT, ARK (Zonderkidz, 2014), GOODNIGHT, MANGER (Zonderkidz, 2015) and is excited to announce that there are more on the way! Laura grew up overseas and in the US, but has spent most of her adult life in New Jersey where she lives with her husband, two children, and a black Cockapoo named Sophie. For her reflections on reading, writing and life,visit her blog at www.laurasassitales.wordpress.com or on Twitter: @LauraSassiTales. She can also be found on Facebook at https://www.facebook.com/LauraSassiTales.


PLEASE COME BACK TOMORROW....
For a Review of Goodnight Manger and a book giveaway!
Posted by Unknown at 3:00 AM