THE STORY BEHIND THE STORY: The Duchess and Guy by Nancy Furstinger, Illustrated by Julia Bereciartu 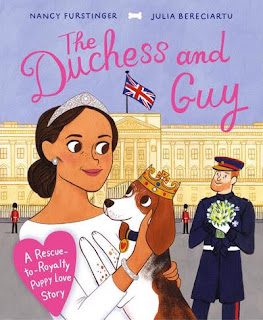 When my agent, John Rudolph, asked if I was a “royal watcher,” I had to admit that I had zero interest in  the royal wedding of Meghan Markle and England’s Prince Harry. But John attached an article about Meghan’s rescued beagle, Guy, who went from a KY shelter to royal life in Barkingham, er, Buckingham Palace.
"Think there could be a book here?" he wondered? "If so, we'd need to move ASAP." Guy's story could be a compelling fairy tale, and I was eager to write it. Most of my books feature animals, especially dogs. Animals are near and dear to my heart: I volunteer at my local SPCA and with a rabbit rescue plus I share my home with two large dogs, Bosco and Rosy, three house rabbits and one chinchilla -- all rescued.

I’m not a super speedy writer, even though I started my career as a reporter for a daily newspaper; I have a tendency to spiral off course as I research and vanish down the rabbit hole. But this time I focused on the “big picture” and soon emailed “Guy, the Regal Beagle” to my agent, who loved my  voice and how I “balanced the sadder aspects of Guy’s live with the happy ending.”  John wanted me to write about how Guy met the queen and her corgis and add in a wedding scene, but quickly, he emphasized again, since the story was “timely and commercial.” Then he submitted it to several select editors, billing me as his agency’s “resident animal expert.” He also told me that this was the quickest submission he’s ever done (that goes double for me)!


I was excited when Ann Rider at Houghton Mifflin Harcourt, which published two of my middle-grade nonfiction books—“Mercy: The Incredible Story of Henry Bergh, Founder of the ASPCA and Friend of Animals” and “Unstoppable: True Stories of Amazing Bionic Animals”— suggested passing along the manuscript to a newish HMH editor, Emilia Rhodes. "As luck would have it,” Emilia said, "we have been talking about a picture book about Guy this past week but don’t have a writer attached.” So on May 31, 2018 I received a pre-empt offer and happily became attached after agreeing to revise (rapidly again) with an emphasis on “a bit more of imagined fun and wish fulfillment of Guy and his new life in Buckingham Palace.”

Emilia thought the story was “sweet and fun” but wanted me to tug more on the heartstrings. So I did a rewrite, followed by yet another overhaul to strengthen the climax plus the pacing in the second half. Emilia is a dream editor her comments and edits made the story much stronger. Plus she is equally passionate about pooches–volunteering for a rescue and adopting two dogs (one was featured in a video for The Dodo!). I also got to see artist samples and was super thrilled with Julia Bereciartu’s illustrations. I was encouraged to add any art suggestions (I only had a few minor ones as the artist brings her own vision to the story) plus sales & marketing loved my speech bubble for Guy and asked me to write more.

My first title was changed and a subtitle was added (and changed twice too) until we all collaborated on a winner: "The Duchess and Guy: A Rescue-to-Royalty Puppy Love Story.” And, instead of taking years like my other picture books, “The Duchess and Guy” burst on the scene January 8, 2019, eight months after I received an offer. What a whirlwind adventure! 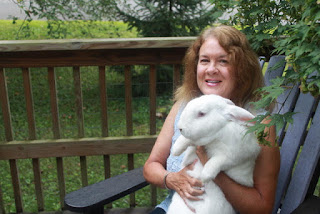 Bio: Nancy Furstinger has been speaking up for animals since she learned to talk, and she hasn’t shut up yet. She started her writing career in third grade, when her class performed a play she wrote while recovering from chicken pox. Since then, Nancy has been a feature writer for a daily newspaper, a managing editor of trade and consumer magazines, and an editor at two children’s book publishing houses. She shares her home with big dogs, house rabbits, and a chinchilla (all rescued), and volunteers with several animal organizations.


FEEL FREE TO CHECK OUT OUT OUR OTHER GUESTS Here:
https://literallylynnemarie.blogspot.com/2019/02/master-list-2019-story-behind-story.html 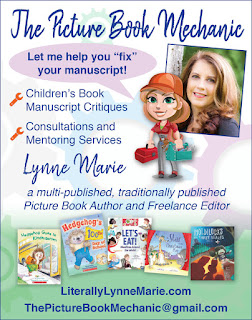