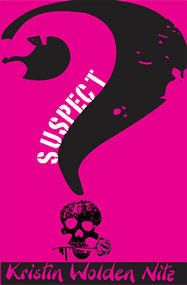 I've always loved all things Victorian, and those who know me will be quite surprised to find out that I am a closet mystery and suspense lover (when I was ten my mother actually took me out of school so that I could meet Phyllis Whitney, revered Mystery & Suspense Novelist and Author of the Chapter Book MYSTERY OF THE GREEN CAT in person and, at one time I had read and owned almost ALL the Agatha Christie paperbacks in print). So when I recently read a summary of  Kristin Wolden Nitz's new Book, SUSPECT...
Jen is scheduled to spend the summer helping Grandma Kay run a Victorian bed and breakfast. But Grandma Kay’s plans include a lot more than housekeeping. She intends to solve a real mystery from the past: the disappearance of Jen’s mother. During the build-up to an elaborate, role-playing Murder Mystery Weekend, Jen’s worst suspicions are aroused. Could a member of her own family be responsible?
I was extremely excited! A Victorian theme, a missing mother, a Murder Mystery Weekend -- perfect ingredients for a gripping tale.  However, as Kristin explains today, for a well-told story, you have to "Let Your Characters Talk to Each Other." Here, she shares some ways to do just that!
*.*.*.*
Let Your Characters Talk to Each Other by Kristin Wolden Nitz 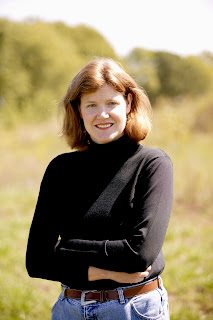 Ever since I read Natalie Goldberg’s WRITING DOWN THE BONES, I’ve been a fan of café writing.  I’ve found that it really helps me immerse myself in a scene. Sure, on some days, I write pages of garbage, but on other days,  I can barely keep up with the give and take of my characters as they interact
So let’s say that there’s a scene coming up between two of your characters.  Instead of trying to pull together a polished scene, let your characters have a conversation while the sounds of the coffee grinder and milk frother fade away.
Here’s a quick summary of Natalie Goldberg’s basic technique:
1.      You “rent” a table at a café or coffee shop by ordering something.  Since you don’t want to waste your money, this should keep you seated.
2.      Sit down, turn off your internal editor and start writing.
3.      “Keep the hand moving.”  Don’t go back to fix things.
Here are my additional suggestions for generating dialogue:
I finished my first draft of my YA mystery Suspect back in 1999 before I started café writing.  But I do have a new scene that I wrote as part of a major revision in December of 2009.  I had thought about sharing the rough draft first and then showing its evolution into polished prose. A quick glance at my notebook showed that the scene would be next to incomprehensible.  So instead, consider reflecting on how a goodly chunk of your scribbles could actually survive draft after draft and wind up in the novel.
FROM THE BOOK
“Listen,” Bri said, “I’ll give you twenty bucks if you do all the bathrooms.”
For a split second, I found myself calculating how many gallons of gas I could put in the Volvo for twenty dollars. Then I told her no in the firmest voice I could manage. “We’ll take turns.”
“But I’ve got my senior pictures tomorrow.  You know what those latex gloves can do to your hands.  I want to look perfect.”  She held up the backs of her fingers and waved her French manicure at me. “I couldn’t reschedule my appointment. Please?”
Or maybe she hadn’t even tried to reschedule so she’d have a good excuse to avoid doing the bathrooms.  The suspicion must have shown in my face because Bri stiffened.
“Come on, Jen,” she said. “it’s not like I’m a total wimp.  I mean, I’ve probably shoveled more horse manure than you ever will.”
PARAGRAPH NOT FROM FIRST DRAFT.
“Fine,” I said. “You can do all the bathrooms the next time we work together.”
Bri pouted. “Couldn’t I give you the twenty instead? I mean, it’s not like you care about your hands.”
PARAGRAPH  NOT FROM FIRST DRAFT.
“Why are you even working here?” I demanded. “You don’t need the money.”
“Mom thinks a job will look good on my college applications,” Bri said, rolling her eyes. “It’s so stupid. She’s always, like, ‘Your dad and I can send you anywhere you want to go, honey, as long as you can get in.’ It drives me crazy. She’s on me all the time.”
Yeah, I thought. Having a mother who cares about you and wants you to be happy must really be rough.
FROM THE NOTEBOOK
I’ll give you twenty bucks if you do all the bathrooms.
Cost more than she was going to make in the next few hours.  He who hesitates is lost.  I lost. Keeping gas in the Volvo’s tank.
I wouldn’t ask, but my pictures are tomorrow. She waved her perfect nails at me.
I would let anyone else off.  I wanted to make her pay.
No. That’s okay.  You can do all the bathrooms next time we work together.
I’d rather give you twenty bucks now.”
Exactly.
What’s the point of working
Mom’s got the college apps on the brain. You can go any place that you can get into honey. It’s hell.
Yeah. Having a mother who cares about you and wants you to have a good life must be rough. 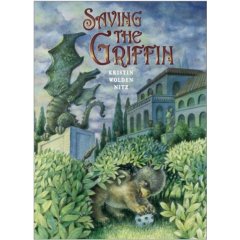 Nitz intertwines and then untangles relationships among the teens and guests, weaving a credible mystery for a wide adolescent audience. With clues and red herrings neatly scattered throughout, the book scores as a darned good little mystery. Intriguing, suspenseful fun. (Mystery. 12 & up)
Shop at Amazon.com!
Website and blog:
www.kwnitz.com
http://kristinwoldennitz.wordpress.com/

Bio:  Kristin Wolden Nitz has lived on the East Coast and West Coast as well as in the Midwest and since graduating from Michigan Tech with a degree in electrical engineering.  She writes the things she likes to read, which might explain why her novels include an upper middle grade sports novel, lower middle grade fantasy and young adult mystery.
DEFENDING IRENE
SAVING THE GRIFFIN
Posted by Donna Farrell at 3:12 PM