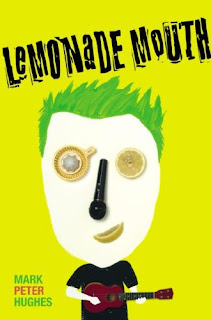 Dialogue is a large part of what makes a character memorable. Coincidentally, it is a dialogue among friends chatting about life and writing while at the 2005 NESCBWI Nashua Conference that keeps Mark Peter Hughes in my mind above others (although I have not seen him since 2005). Even then, it was apparent that he was of a unique and brilliant mind, with a mouth that had much to say!

When I met Mark,  his first book, I am the Wallpaper (a Delacorte Press Young Adult Novel Competition Finalist), had just been released. His second book, Lemonade Mouth, is being made into a Disney Channel Original Movie Musical! His first two books both met with critical acclaim, and his third book, A Crack in the Sky, was released on August 24, 2010, to wonderful early reviews. You can read more about it below.
If you are not already familiar with Mark Peter Hughes and his work, I am extremely pleased to introduce him to you now.

WRITING PROMPT - DIALOGUE:
Two children were recently shipwrecked on a deserted island. They’ve found a source of food and water, but they’re scared and not at all sure anybody is looking for them. They have one flashlight, but the light is already growing dim and it’s obvious the battery is about to die. It’s dusk. As they sit on the beach and watch the sun go down, they talk but never mention about being shipwrecked. Their emotions are revealed but only indirectly, and the more they avoid directly discussing the real problem, the more the reader will feel it hanging over them. Write the scene. 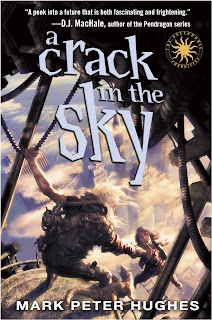 A CRACK IN THE SKY DESCRIPTION BLURB:
It's decades in the future and the world is overheated. The last of humanity struggles to survive in a world devastated by disease and violent storms. While nomadic savages run wild in the wasteland beyond the dome-protected cities, inside the artificial city of Providence thirteen-year-old Eli and his brain-boosted mongoose are unaware of the dangers that lie just outside their synthetic world with its cooling systems, air purifiers, and electronic sky. When Eli starts to uncover the truth, he learns that being a child of privilege won’t be enough to save him from losing everything that he loves—maybe even his own life.
A Crack in the Sky is the first in a new sci-fi fantasy adventure series for kids. D.J. MacHale, author of the Pendragon series hailed it as, "A peek into a futre that is both fascinating and frightening." More at www.markpeterhughes.com. 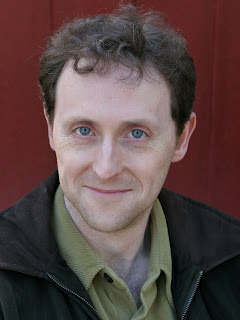 MARK PETER HUGHES BIO:
Mark Peter Hughes was born in Liverpool, England, and grew up in Barrington, Rhode Island. A Crack In The Sky is his third novel for kids. His previous, Lemonade Mouth, is being made into a Disney Channel Original Movie musical for 2011, and is about a high school band. His novel I am the Wallpaper was a Children's Book Sense Pick, a New York Public Library Book for the Teen Age, and has been translated into German and Thai. Mark is very bad at lawn maintenance and even worse at selling shoes. His website is www.markpeterhughes.com.
Posted by Donna Farrell at 6:21 AM