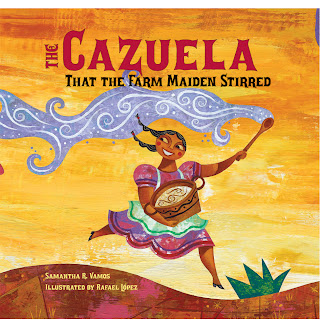 Ask "What If?" by Samantha R. Vamos
I have an extremely simple “What if” writing exercise, which I typically perform several times a day.  Almost every day, I hear a little voice in my head pose the question, “What if _________” in response to a situation.  Here’s an example.  The other day I peered out my front door and discovered a box.  I neither recognized the labeling, nor the sender’s name, and the idea occurred to me – instead of opening the box to find an item I had ordered online, what if all that I found inside was a mysterious code and a cryptic note from a friend, or a telephone number and a photo of a friend in a setting I did not recognize?  Sometimes I answer my “What if” questions by writing my imagined responses and evaluating whether any of the answers evolve into threads that may be sewn together as a storyline.
The idea for The Cazuela That The Farm Maiden Stirred occurred to me after performing my “What if” exercise.  I was in the kitchen gathering ingredients to make pancakes and realized I lacked both milk and eggs.  At the time, my husband and I lived in Chicago, Illinois and did not own a car.  That morning was bitter cold with gusty winds and the prospect of walking to the subway or waiting for a bus to the nearest grocery store was not appealing.  Suddenly, I thought what if I lived on a farm and I could simply call one of my animal “neighbors” for a pail of milk or a basket of fresh eggs?  Envisioning myself a farm maiden, I smiled and my story took off from there.  I never finished making pancakes that morning, but I did manage to write a first draft of our story!
One more thing:  there is a recipe at the end of The Cazuela That The Farm Maiden Stirred, but it’s not for pancakes! 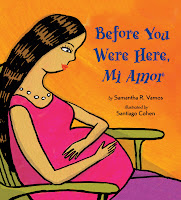 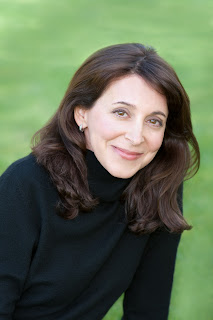 More About Samantha and Her Books:
Samantha attended Georgetown University Law Center, and once upon a time, practiced law in Washington, D.C. and Chicago, Illinois.  Now she’s a full-time mom and part-time writer, who, upon moving to the Pacific Northwest, has added coffee to her already significant chocolate addiction!
Before You Were Here, Mi Amor (Viking, 2009), her first children’s picture book, won the 2010 Washington State Book Award for Picture Book and was featured as “Best for Babies” by Parents Magazine (May 2009).  Samantha’s second picture book, The Cazuela That the Farm Maiden Stirred (Charlesbridge, 2011, illustrated by Rafael López) released February 1, and is an amusing tale of five farm animals, their farmer, and a farm girl.  From the book jacket:
"When a farm girl starts cooking, all the animals want to help.  The cow contributes milk, the hen offers eggs, and even the duck makes a special trip to the market.  While the pot is bubbling merrily on the stove, everyone dances and sings - but who is watching the cazuela?  Samantha R. Vamos and Rafael López serve up a spicy tribute to the classic nursery rhyme "The House That Jack Built" in this bilingual celebration of community and food.”
In The Cazuela That the Farm Maiden Stirred, as the action builds, the Spanish words repeat.  At the book's end, a glossary with pronunciation and recipe are provided.
Posted by Donna Farrell at 6:32 AM